When you hear solar power, you're probably thinking photovoltatics (PV) .

In fact, all but one* solar projects documented on Watt Now have been PV technologies.  And solar PV has dominated the media lately due to significant cost reductions in PV manufacturing and concern about China's control over the PV supply chain. 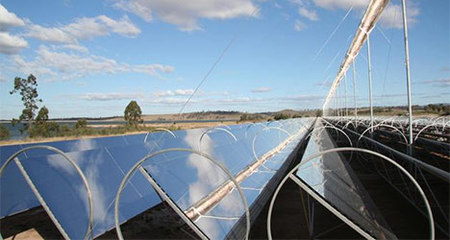 Unlike PV, which converts solar energy directly into DC electric power using semiconductor materials and the photoelectric effect, the basic principle of CSP is to use solar energy to heat water.

From there, the CSP system closely resembles a conventional power plant (re. coal, gas, nuclear): the hot water becomes high temperature steam to operate a turbine which converts mechanical energy into electrical energy.

BrightSource Energy  is an Oakland, CA-based CSP "startup" that was founded in 2004, raised over $160 million in funding, and already has  13 orders for solar thermal power plants to be built between now and 2017.

BrightSource's CSP design is a solar tower design, where dual-axis rotating heliostats (mirrors) concentrate sun rays onto a central tower (boiler) which captures the heat and  generates pressurized steam, which is then piped to a conventional steam turbine generator.

BrightSource was planning for an IPO this year in order to raise an additional $250 million in funding, but recently withdrew the IPO due to weak markets and decreasing (and therefore competing) costs from PV markets.

So does CSP really have a future if PV solar keeps getting cheaper and cheaper?  The answer is, yes.

PV solar and thermal solar are largely complimentary technologies, and where PV solar is modular, flexible, and can be built close to the consumer, CSP offers two major advantages over PV:

CSP systems are especially efficient in hot, arid, and semi-arid regions, and costs are going down as the industry matures.  The International Energy Agency estimates that CSP technologies will be cost competitive with conventional technologies for peak and intermediate loads by about 2020.

BrightSource expects its first commercial-scale project, Ivanpah, to start operations in 2013.  Ivanpah, located in the Mojave desert, is a 400-MW farm (the largest solar plant in the world currently under construction!), financed largely by NRG Energy and Google.

With BrightSource's substantial order backlog, and increasing engagement in CSP around the world (including 50 projects planned in Spain, and the ambitious Desertec project in North Africa) --

CSP has a long future ahead.

*A Liter of Light is a project that uses recycled plastic bottles filled with water to light homes through refraction.