Ford revealed its new Ford C-Max Solar Energi concept car at CES 2014: a car equipped with 300W of semi-flexible rooftop solar (Sunpower) that can run quasi-entirely on solar charging without need to draw energy from the electric grid.

The innovation in the system lies not only in the high-efficiency solar panels but also a unique charging station composed of solar concentrator and sun-tracking technology that allows to charge the car's battery in one day (as opposed to one week if the solar panels worked alone!). 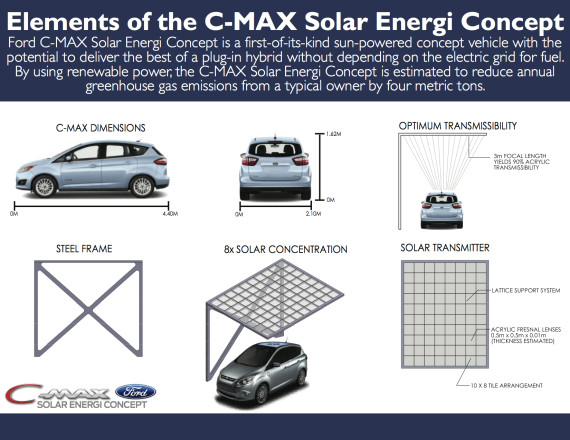 The canopy structure contains Fresnal lenses to  concentrate the sun's energy on the panels, and moreover, the car is actually programmed to inch backward and forward to track the sun throughout the day!

For the moment, the C-Max Solar Energi remains a "concept car" (clocking in a mere 21 electric-only miles per charge), but hopefully the project will kick other car companies into gear for other exciting solar-powered transport innovations.