London-based Pavegen builds energy-harvesting tiles based on a hybrid piezoelectric technology that transform footsteps into electricity.

The technology is featured at the London Olympics, where 12 tiles have been installed at the West Ham tube station connecting to the Olympic Park.  These tiles generate and store electricity (each has a small battery) in order to power 12 LED spotlights along the walkway during nighttime hours. 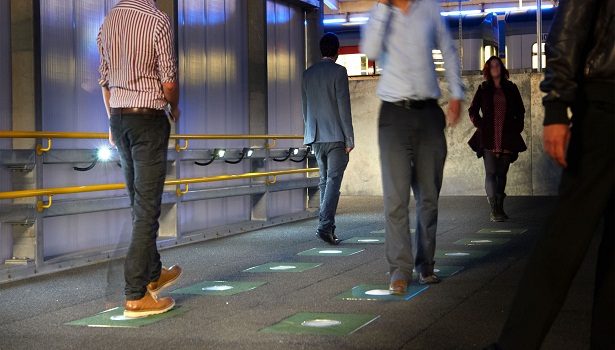 Pavegen provides live feed of the energy created at the West Ham installation in terms of footsteps and watt-hours.  Each tile has a capacity of 6 watts, but in order to use the tile's full capacity, there needs to be a constant flow of about 50 steps / minute.

The reality is that the tiles are seeing about 5 steps / minute, and on a good day, the kinetic sidewalk will generate about 75 watt-hours of electricity.  This is equivalent to powering an old 60-watt incandescent lightbulb for about 1 hour and 15 minutes.  Or six LED 60-W equivalents (at 10-W each) for the same amount of time.

Are the tiles generating enough electricity to power the walkway's spotlights?

The results might not seem that impressive, but the Pavegen system provides more than electricity - the technology also provides an interactive opportunity to engage people with sustainability and energy understanding.

Each tile is equipped with a small central light that is illuminated each time the tile is stepped upon, informing  the walker that something is different about this tile than the cement next to it.  This small central light consumes only 5% of the energy generated, the rest of which can be stored or used for other low-power applications.

Moreover, the tiles are made from recycled rubber (old "lorry" tires) and other recyclable materials.

The Pavegen technology is practical in areas with high foot traffic - metro stations, offices, schools, shopping centers - and is particularly useful were grid connections are not feasible.  The power generated can be used to charge batteries or to power low-energy applications, such as street lamps, signs, alarms, or speaker systems.

At this stage, the Pavegen system does not seem commercially viable on its energy-generating capacity alone, but combined with the interactive potential, Pavegen is a pretty cool system.

Hopefully as the technology improves, it will be commercially viable and soon sidewalks around the world will be lined with Pavegen tiles.  Due to its distributed nature, the Pavegen system could be particularly interesting for off-grid rural areas to power street lamps, especially if the materials could be resourced locally and the tiles could be manufactured locally.

And they've already tested the Pavegen technology with dance installations, but could you imagine if they installed Pavegen tiles in Dance Dance Revolution machines?  There's one way to maximize the capacity of the tiles.

The options are endless.