The key challenge facing the successful integration of renewable sources (re. solar, wind) into grid infrastructure is intermittency.

Energy storage is therefore a key necessity to the adoption of renewables.  However, as we have seen with projects like LightSail Energy, storage technologies are currently prohibitively expensive to be used at grid-scale.

The traditional energy model uses gas to generate electricity.  However, now that we have this "surplus" of renewable-generated electricity, SolarFuel has turned the classic energy model on its head -- to convert electricity into natural gas, which is efficient, CO2 neutral - and most importably, storable.

First, renewable-generated electricity is used to separate water into hydrogen and oxygen via electrolysis.

The second step is a methanation process which combines the separated hydrogen with ambient CO2 to produce methane (CH4), which can be used as directly as an automotive fuel (efficiency of 60%) or then reconverted into electricity, a process described as power to gas to power, or P2G2P (efficiency of 40%). 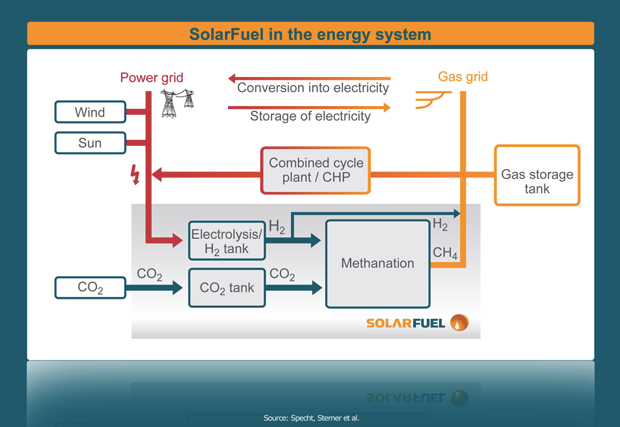 SolarFuel's plant will convert the wind-generated electricity into natural gas and will be operational in 2013, in time for Audi's new compressed natural gas car model, A3 TCNG.

In all, SolarFuel's revolutionary P2G technology responds to the challenge of intermittency with a creative system that elegantly combines renewable energy, energy conversion, storage, and transportation.