Wysips, based in Lambesc, a small village in the South of France, is developing a transparent solar film technology that can be seamlessly integrated onto the screen of a smartphone -- and replace the need for chargers and wall sockets.

Wysips envisions implementing the solar technology on a wide range of applications from billboards to sailboats, but first development efforts are focusing on mobile phones and LCD screens.

The Wysips solar film is not actually transparent, but appears transparent to the user by implementing lenticular printing, an optical technology which shows different images depending on the observer's position and is used often to create 3D effects and animations.

The Wysips product consist of two layers mounted onto the smartphone screen (or other object):

The Wysips transparent solar film is based on lenticular technology.

The Wysips technology can either be a flexible or rigid film with a thickness of .1-.5 mm, and for smartphones, will cost about 1 euro per screen, and fully charge in 6 hours of sunshine (one hour will generate enough power to talk for about 30 minutes).  The film can even charge in artificial light for people working indoors, but it takes about 5 to 10 times longer.

As Ludovic Deblois, co-founder and president of Wysips, describes, "If we move quickly, we could have the same success as the touch screen [had] a few years ago.  We are aware of the potential of our technology". 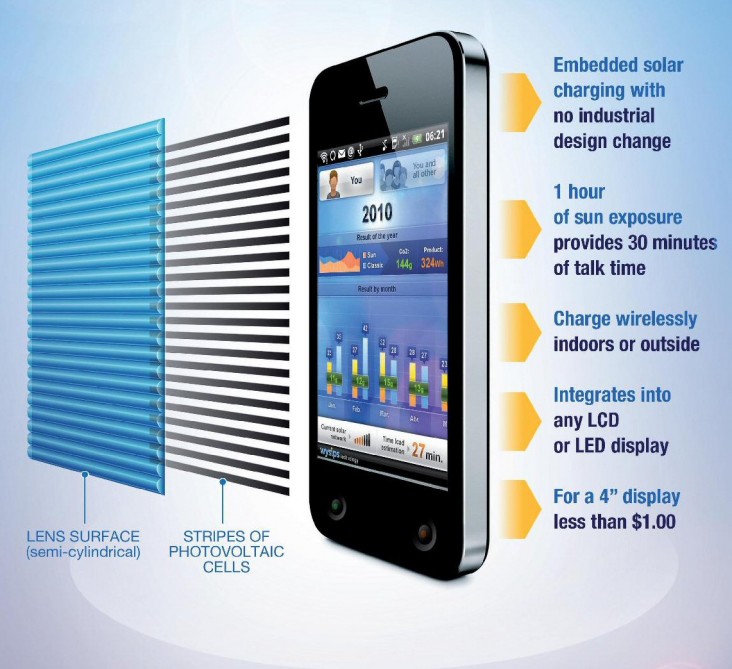 Wysips - "What You See Is Photovoltaic Surface"