Typically, as a vehicle slows down or comes to a stop, the vehicle’s kinetic energy is dissipated as heat.  The MotionPower system however, as with regenerative braking that we see in hybrid and electric vehicles, is designed to capture and convert the vehicle’s wasted kinetic energy into useful electricity.</p> 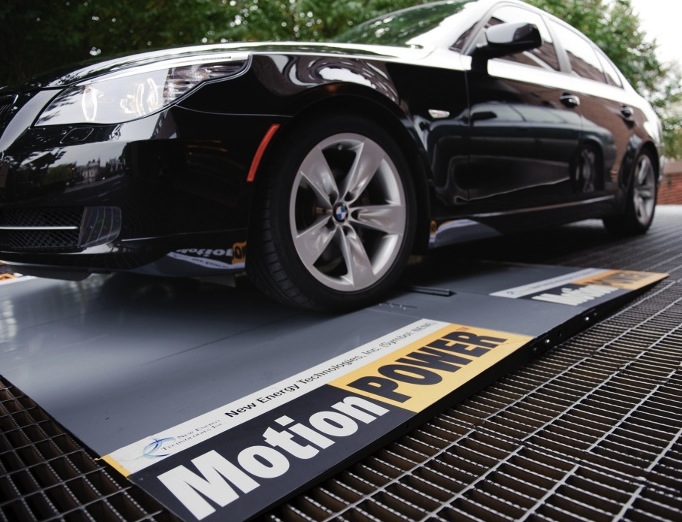 The MotionPower system is a platform composed of small mechanical treadles, that are depressed (or folded over) when rode over by a vehicle, helping to slow the vehicle down, and extracting and converting the car's motion energy into electricity.  See video below for a demonstration of the technology.

New Energy Technologies conducted durability tests back in 2009 at a Burger King in Hillside, NJ and a Four Seasons Hotel in Washington, DC, and most recently built the first working model of their system in collaboration with the city of Roanoke, Viriginia at the city's civic center in October 2011.

New Energy Technologies confirmed that the 600-car 6-hour demo at the Roanoke Civic Center produced enough electricity to power lights for an average American home for an entire day (a typical car slowing down from 15mph to a stop will dissipate 7300 Watts of power for approximately 6 seconds).

Let's be honest - 600 cars to power the lights of one house?  Not that impressive.  But - what is exciting about MotionPower is that this distributed source of energy can be implemented in a variety of locations - from parking lots to toll booths to rest areas to drive thrus - any area with a high-traffic of slowing vehicles.  Moreover, New Energy Technologies is continually improving the efficiency of their system, and working especially with heavy vehicles (buses, trucks, etc) which will produce more than 10x the electricity of a typical car.  So the potential of the MotionPower technology is quite huge. 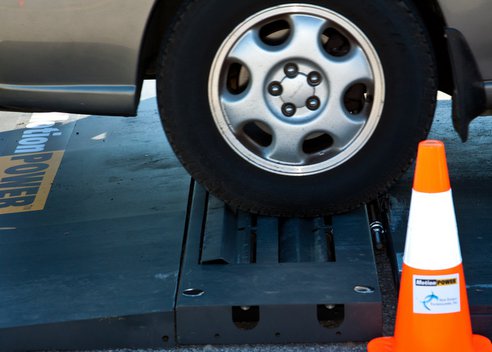 What's next for MotionPower?  Well, New Energy Technologies is also busy developing a separate exciting technology, the SolarWindowTM, which generates electricity with see-thru solar cells on glass surfaces.  Hopefully we will see commercial expansion of these two distributed technologies in the very near future.