The LanzaTech process centers around its patented, wholly-owned microbe, categorized as a WHO-risk 1 organism (same as baker's yeast).  Through a fermentation process, the microbe acts as a biocatalyst to break down industrial waste gases into ethanol and eventually other fuels and chemicals, including diesel, jet fuel, and plastics.  Check out this video for a more-detailed explanation of the LanzaTech process. 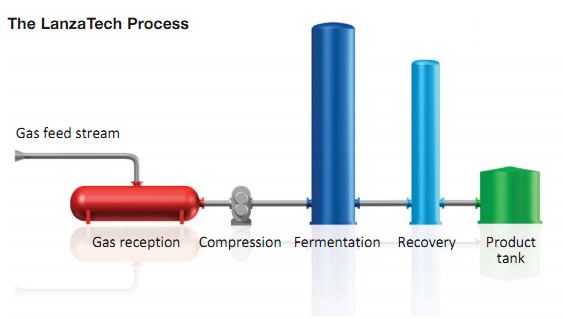 I'll admit - a small part of LanzaTech's attraction is its Kiwi roots (though they have expanded their offices to China and the US) and a strong female leader at its head, Jennifer Holmgren.

Beyond these rarities, LanzaTech, along with other startups like Joule Unlimited and Novomer, is making headlines by moving quickly and strategically towards a clean, economic, and industrial-scale waste-to-energy solution.  Lanzatech launched a pilot plant in 2008 at the BlueScope Steel Mill in New Zealand, successfully demonstrating the LanzaTech process and plans a full-scale commercial facility in 2012, and the world's first steel waste gas to ethanol plant in 2013.

LanzaTech, backed by Khosla Ventures, has also secured strategic industrial partnerships to guarantee a robust full-scale expansion.  For example, they've partnered with Chinese steel manufacturer giants, like China's #1 BaoSteel Group Corp, to build plants at steel mills, as well as the US Department of Energy on making jet fuel.  Ya know, just a couple "small" partnerships to name a few. Clearly, not only does LanzaTech possess a brilliant technology, but they know how to leverage the technology in today's international market.

LanzaTech was founded in 2005 with a goal "to develop and commercialize proprietary technologies for the production of low-carbon fuels that do not compromise food or land resources".  Today, that goal is about to be realized.