The Hiriko, meaning "Urban Car" in Basque, is a folding electric vehicle with ultra-maneuverability, designed for crowded cities. 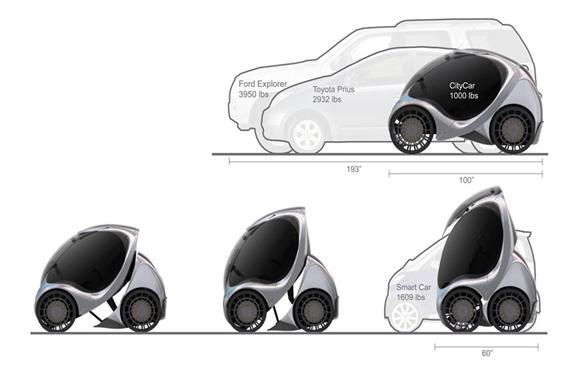 Developed at MIT Media Lab's Changing Places group, the Hiriko is a project led by seven small Basque firms and was successfully unveiled at the European Commission last week.

The technical splendor behind the Hiriko are the "Wheel Robots".  Basically, the maneuver components of the car - motor, suspension, steering, braking - are integrated into each wheel, instead of being centralized.  These modular wheel systems allow several advantages:

The Hiriko is equipped with lithium-ion batteries with a driving range of 120km (75 miles) per charge.  When folded, the Hiriko is about 60 inches, such that three Hiriko vehicles can fit in the same parking space as one normal car.  The vehicle can carry two passengers, which enter the car through the front windshield which swings upward to open.

The Hiriko is envisaged as part of a car-sharing program like Autolib', but will also available for personal sale at about 12,500 euros.

Backed by Denokinn, a Basque investment group, trial production of 20 Hiriko cars and a pilot of a car-sharing program will begin in 2013 in the Basque Region.  And eventually they hope to expand to cities around the world, with discussions already in progress with Berlin, Barcelona, San Francisco, and Hong Kong.