GreenShields, based just outside of Chicago in Highland Park, IL, is a project to retrofit traditional school buses with a Plexiglas shield to reduce drag and therefore reduce fuel consumption by up to 28%. 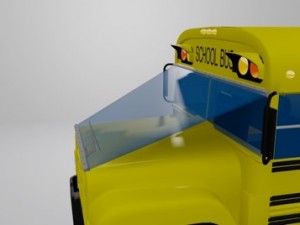 Plexiglas shield to improve the aerodynamics of a school bus.

GreenShields is run by a bunch of teenagers, led by Jonny Cohen, 16, the genius behind the project - the idea for which he had when he was 12. 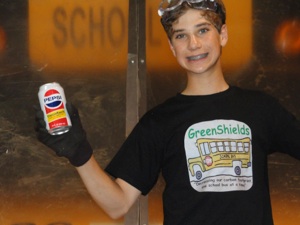 Are you feeling depressed that a 12-year-old had more creative ingenuity than you do?

I admit I felt that way at first.  But now, I'm just really inspired.  Jonny had a patent application ready, but decided to withdraw it, because he says "I'm not necessarily looking to make money off this.  I want to make as big of a difference as possible".

And what I find exciting about this project is that a small, simple adjustment to an existing system can make a huge impact.  When you consider that a school bus has a fuel efficiency of about 8 mpg, and that adding a simple piece of plastic could improve that mileage by 2 -3 mpg, that's huge!  Especially when we're talking about hundreds of thousands of school buses in the US alone.

Jonny Cohen and his team won a $25,000 grant from Pepsi and Jonny was recently highlighted on Forbes' 30 under 30: Energy list.