Eole Water, located in the south of France, builds small-scale wind turbines that co-generate electricity and fresh drinking water through a unique and patented condensation process.

Marc Parent, the founder of the Eole Water, had the idea for turning wind "into water" back in 1997 when he was living in the Antilles, and discovered that he could produce his own drinking water by recuperating excess water from his air conditioning system. 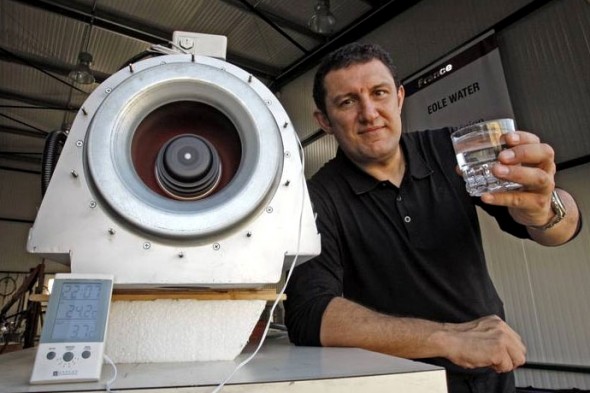 Parent soon thereafter built a system combining wind turbine technology with this water-generating process and after receiving two international patents in 2000 and 2005 and founding Eole Water in 2008, Eole Water today is well on it's way towards creating a system that collects "drinking water every day without an external energy source, while respecting the environment".

Eole Water's latest product, the WMS1000, is designed for remote-area locations and has a power output of 30kW and produces an average of 1000 liters of water per day.  Obviously, the output depends on the location's climate conditions but even in a desert, the WMS1000 will produce about 300 liters of water / day.

So how does it work ?  Eole Water's wind turbine generates electricity which powers a sort of air conditioning system, composed of a cooling compressor, heat exchanger, and humidity condensor, which coverts water vapor in the air into liquid water.  This "rain water" is then easily made drinkable through a remineralization and filtration system.

In addition to drinking water, the Eole Water system is designed to produce 25%  more electricity beyond what is needed to power the water system, or, can be programmed to produce electricity-only, at which point the WMS100 for example, acts as a normal wind turbine producing 30kW of power. 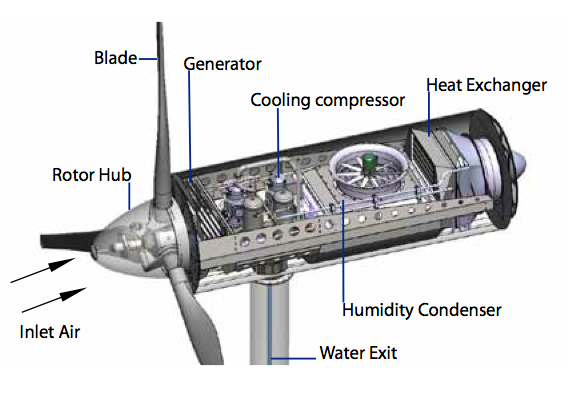 Eole Water is currently building a pilot system of the WMS1000 in Abu Dhabi and plans to start other projects in 2012.