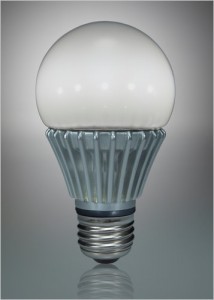 In the US, incandescent lightbulbs will be outlawed by 2014 (Europe already started phasing them out in 2009).  The use of compact fluorescent lightbulbs (CFLs) has been growing in the past years as an efficient alternative to incandescent lights, but now LED lights are making some noise as they become more cost-competitive and are even more efficient and easier to recycle than CFLs, as seen with Digital Lumens for industrial lighting.

Why Switch?  The Switch lightbulb is a perfect amalgam of design and function.

LED lights often lack the softness of incandescent lightbulbs because they are directional, but Switch has solved this problem with their unique vertical mounting structure design that arranges the LEDs outwardly, creating a bright, warm glow.  Furthermore, the bulb's metal bottom, besides looking cool, disperses heat and contains an intelligent system that continually monitors the bulb's temperature, allowing the bulb to last 25,000+ hours (~20 years).

Switch lightbulbs will cost about $20/lightbulb which might seem a bit steep for a lightbulb, but as they use 85% less energy than incandescent lightbulbs and last 20x longer, each bulb will amount to about $150 in savings.  Nice!

The Switch bulbs will be available for sale in early 2012.  Also, Switch Lighting was featured in Time Magazine's latest Invention Issue.  Check it out!