Makani's AWT, flying at altitudes of 300-600 meters, is a rigid wing with small mounted rotors that drive high-speed generators.  The electricity is transmitted to the ground by conductors in the tether. 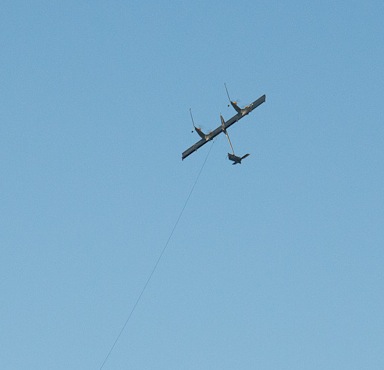 Why so high?  Traditional horizontal axis wind turbines (HAWT) stand on towers of about 100 meters.  By flying at altitudes 3-6x higher, Makani's AWT can benefit from stronger and more consistent winds.  Therefore, Makani's AWT has a higher net capacity factor (NCF) than traditional wind turbines.  In fact, Makani's AWT's NCF is greater than 30% (which is considered a minimum capacity factor for localizing a grid-scale wind farm) over almost the entire US.

Traditional wind turbines have an NCF greater than 30% only over 15% of the US.  This means we can localize Makani systems even in "less-windy" locations where normal horizontal axis wind turbines would not operate efficiently.

In addition to being more efficient than traditional wind turbines, the Makani system weighs 1/10 of the mass and is half the cost of an equivalent HAWT.  Wow!

Makani Power, founded in 2006, is funded by ARPA-E as well as venture capitalists including Google, and recently won Popular Mechanic's 2011 Breakthrough Innovator Award in the Energy Category.

Makani is currently running test flights and plans to have a 1MW prototype ready in 2013 and a commercialized product in 2015. 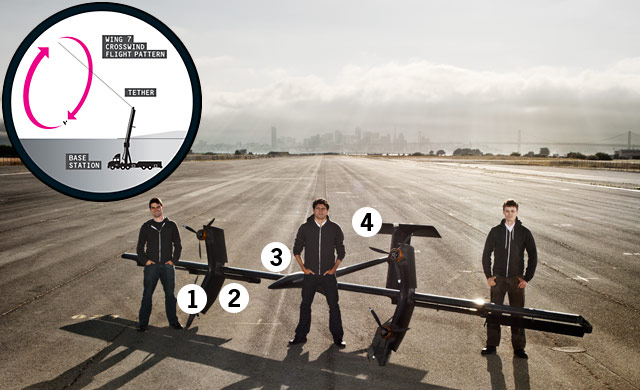