Opower is an energy efficiency software company that partners with utilities (57 to date) to provide a customer engagement platform for household customers to track, understand, and optimize their energy use.

Back in 2006, Opower founders Alex Laskey and Dan Yates knew they wanted to start a project in energy and the environment - but moreover, they wanted to do something that made a real IMPACT.

The two guys realized that contrary to most energy and climate issues, energy efficiency is something that everyone more or less agrees on - democrats, republicans, rich, poor, men, women, even utilities.  We can all agree that using less energy is a good thing.

They also noticed that a lot of engineers and companies were focusing on innovating on the supply side (solar, wind, storage, etc) rather than the demand side (how we USE energy).

And that the industry was totally underestimating the impact we could make improving the demand side.

Thus, Opower was born.  And in less than 5 years, Opower has grown from 2 to 250 employees and has saved 500 million kWh, as much energy as that produced by more than 50% of the US solar industry.

What makes Opower different from the other smart grid players?

Well to start, Opower calls its technology "behavior-based energy efficiency".  They realize that people want to save more energy at home, but that there is a big gap between intention and action.  Thus, Opower uses behavioral science to design its software to actually get the customers to change the way they use energy.  For instance, the Neighbor Comparison:

Each household receives a report, showing how their recent energy use compares to that of average neighbors, as well as to their most efficient neighbors.  As Opower puts it, "even those who are not motivated by money or the environment can be motivated by competition".  The idea of comparing ourselves with our neighbors reminds me of this awesome 1BOG infographic titled The Science of Peer Pressure. 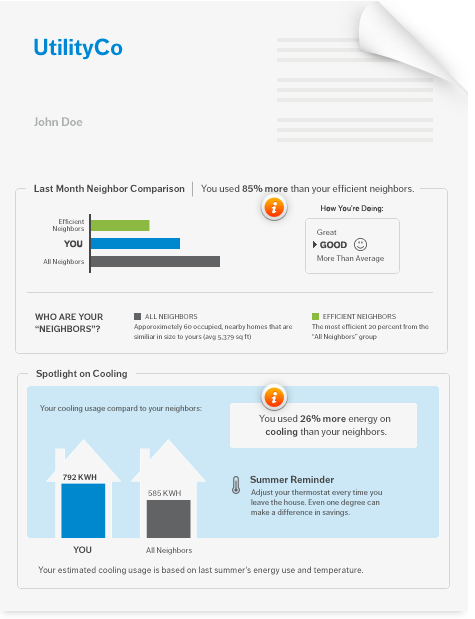 A sample of a Home Energy Report

Beyond the science, Opower customizes the software for the user based on the customer's personal information - housing type, demographic, geography - to provide and present information and improvements that actually engage and make sense for the users.

And finally, Opower realized that the way to really make things happen quickly -- was to partner with the utilities.  Other companies shied away from approaching the giants, but instead of fight or shy away from them, Opower partnered with them.  And now over 10 million households are using Opower software.  Talk about impact.

In addition to the utilities, Opower recently made another strategic partnership in order to reach out to millions in the fastest and most effective way in our social media driven culture: Facebook.

By leveraging the Facebook platform, Opower, Facebook, and the Natural Resources Defense Council (NRDC) will create a new social energy application, that will enable consumers to benchmark their home's energy usage against a national average, compare their energy use with friends, enter energy-saving competitions, and share tips on how to become more energy efficient.

A bit like Farmville, but ya know, with real-life applications that could actually engage (real) communities and save (real) households a lot of money.  The app will be running in early 2012, but you can sign up now to be first in line.