If you know anything about the solar industry (which is likely more than I do), you've probably heard of 1366 Technologies.

Based in Lexington, MA and named after the solar constant (not a street address like 1369, one my favorite Cambridge coffeeshops), 1366 has developed a novel manufacturing technique to produce silicon wafers by casting (in other words, pouring molten silicon into a mold) as opposed to slicing from a large ingot.  This new approach will eliminate silicon waste (generally 50% of silicon is wasted in the traditional manufacturing process) and reduce the cost of solar panels by 40%.

As US Secretary of State Steve Chu puts it, "1366 Technologies is a prime example of the innovative brilliance of Americans".

Let's just say, the DoE is a huge fan of 1366.  Like General Compression, an energy storage startup I wrote about a couple weeks ago, 1366 received a $4 million grant from ARPA-E back in 2009.  And, despite recent bankruptcy issues with government-aided renewable companies, the DoE issued a $150 million loan guarantee to 1366 just over a month ago.  The government is clearly inspired and sees 1366's technology as innovative -- but also realistic.  Jonathan Silver, head of the DoE's loan guarantee program says, "It's a process innovation, not a product innovation.  They can produce silicon wafers with much less material and many fewer steps."

1366 Technologies has started commercialization of its solar-cell design and expects that innovations in silicon PV manufacturing will continue to reduce solar costs so that by 2020, solar is cheaper than coal.

Personally, I'm hopeful -- especially when you look at this graph and see that the cost of solar has dropped by a factor of 30 over the past 30 years: 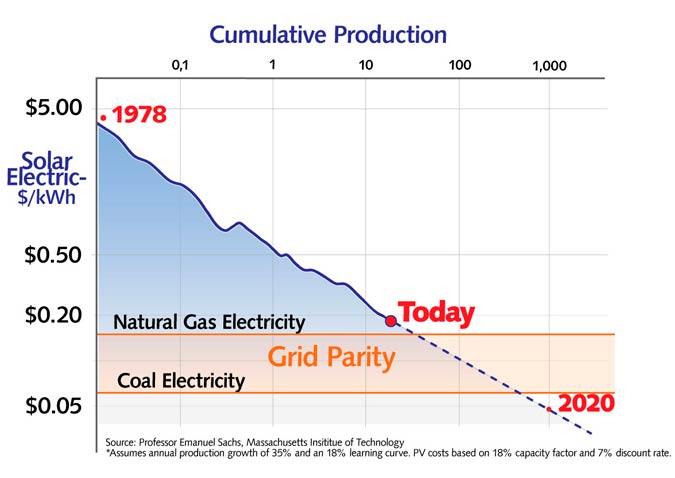 Maybe I'm being naive?  I admit, I have to learn more about solar economics.

Regardless of my economics babbling, 1366 Technologies is undoubtedly leading the way towards cheaper and more efficient solar power - and who knows, maybe in the process, we can shift the solar manufacturing center of gravity back this way?