QGEN is developing utility-scale solar hybrid power plants and water desalination plants to own and operate in key markets around the world.  Based in Waltham, MA, QGEN is targeting regions around the world that receive lots of sunshine, but at the same time, are very poor in water resources, such as the Mediterranean, South Africa, and Chile. 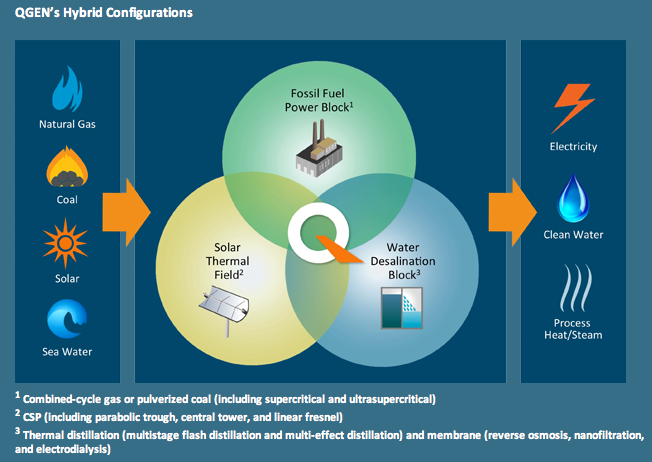 What's behind this idea?  "We cannot rely on market intervention mechanisms alone to bring about the deployment of renewable energy technologies".

QGEN believes that the world must transition to a multi-sourced global infrastructure - but that radical change is difficult to embrace in the energy industry.  Rather, QGEN believes that we should focus on evolutionary hybrid solutions which ease the industry transition by integrating renewable energy systems (in QGEN's case, CSP) into existing fossil fuel power plants to improve the cost competitiveness of renewable sources without relying on government subsidies.

In 2010, QGEN along with three other hybrid companies, established the Hybrid Energy Consortium (HEC) to promote and accelerate the development of integrated solar combined cycles (ISCC) power plants.

I'm all about energy models, like QGEN's, that are appropriate, easy to implement, and designed to avoid complex policy requirements.  The idea makes sense.