There's so many cool things you can do with pedaling power.  Like power a school bus.  Or charge your cellphone.  Or sew a sweater.

La Petite Reine is a French company that employs bicycle power to optimize the delivery of goods in dense urban communities. 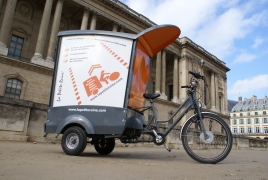 La Petite Reine developed the Cargocycle to overcome all the downfalls of a truck or van delivery in an urban setting - trucks are BIG (weighing over 1 metric ton), often way over-dimensioned (carrying less than 100kg of goods), and SLOW, especially in city traffic.

Cargocycles, weighing in at 100kg with a carrying capacity of 180kg, are not only better-dimensioned for city deliveries, they can maneuver and park much more easily, they are cheaper to operate, and best of all, they are much more environmental!

La Petite Reine has expanded beyond Paris to Bordeaux, Lyon, Rouen, Geneva, and even London!  The Cargocycle is clearly an appropriate technology for dense cities, especially if there are lots of small and twisting streets that are truck-prohibitive, as many European cities are.

Could a system like this be appropriate for US cities, which tend to be more spread out and sprawling than European cities?  Apparently, B-Line seems to think so, offering tricycle cargo deliveries similar to La Petite Reine, in where else but... Portland!

Here are ten more ideas of awesome things you can do with a bicycle.