What do you do with leftover cooking oil?  You can't throw it down the drain.  You're supposed to store it in a jar and then throw it safely in the trash.  Too bad you can't recycle it.  Or can you?  Green Grease Monkey has found a clean and economic model to recycle cooking oil.  Based in Jamaica Plain, MA, Green Grease Monkey converts diesel engines to run on Waste Vegetable Oil (WVO).

For restaurants or suppliers that produce large volumes of WVO, Green Grease Monkey will come pick up the oil free of charge.  This avoids the WVO going to the landfills and also provides a cheaper solution for the restaurants as they usually have to pay to get rid of the stuff.

For drivers, Green Grease Monkey can convert an engine in less than a day for about $1200.  Depending on how much your waste vegetable oil supplier charges (Green Grease sells it for $1.75/gallon, but most restaurants would happily give you their WVO away for free) and how much you drive, you can easily have a payback period of less than a year.

Green Grease Monkey not only has a cool name, but provides a solution that is clean, cheap -- and everyone wins.

Yet another cool idea that is simple, small-scale but effective, and really create a "closed-system" (aka reusing goods instead of sending them to the dump).  Restaurants should convert all their delivery vehicles to biodiesel - from french fries to roadtrippin' in one go!  That would be the ultimate direct and optimized closed system for waste vegetable oil. 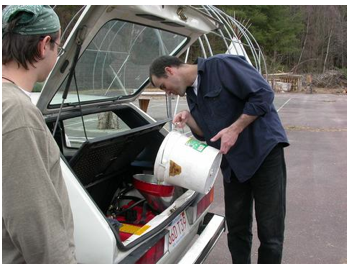 Patrick Keaney, 1/2 of the employee population of Green Grease Monkey, pouring WVO into the converted tank of his car.