Is this the future?  Solar-paneled roads? 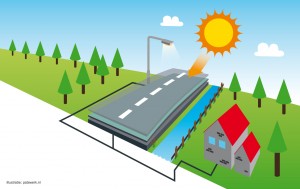 The SolaRoad project has been developed by a Dutch consortium led by the TNO research institute.   The technology is simple - a concrete module, covered with a 1cm layer of silicon solar cells, protected on top by a robust glass layer.  The SolaRoad technology produces about 50kWh per m2 per year, enough to power street lights, traffic lights, and other small local needs (maybe even a BigBelly compactor ?). 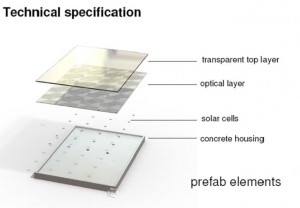 We don't have to look that far into the future for this sort of technology to be implemented-- because TNO expects to have a pilot project in place as soon as 2012 !  The plan is to install 100m of SolaRoad on a bike path in Nothern Holland in Krommenie, near Amsterdam.