From the same guys that developed the Humdinger technology comes... B-Squares! 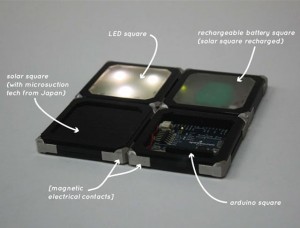 How do I explain?  It's a system based on modules or "squares" - each standard in shape and size.  Each module serves a certain function - any function really (so far they've developed the battery square, the LED square, the iPhone square, and more ...) -- and YOU can even program what you want it to do - especially with the arduino module.  The squares have magnetic edges, allowing them to "snap into" one another.

Above all, the idea is that squares are powered with the "fundamental square" which is the solar square.

Example - you're at a picnic and a) your iPhone is dead, and/or b) you want to play music.  Just hook up the Solar square to the iPhone square which serves as a charger, a dock, and possible a connector to Speaker squares. From ANYWHERE (as long as there's sun.  But otherwise, just bring along the Battery square). 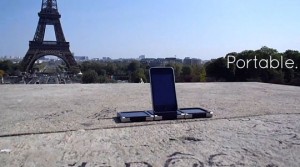 It's portable.  It's functional.  And most of all, B-Squares brings renewable energy to the individual.  It's shifting the paradigm.

If you still don't totally get it, here's a video that explains it all:

The project is currently on Kickstarter, so if you want to be more involved, invest in B-Squares!