It's been a while since I read this book.  And while the saying goes "don't judge a book by it's cover", I admit- I was kind of attracted by the cover of this book. 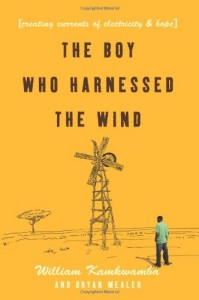 It's inviting, isn't it?

And moreover, the book is great.  And incredibly inspiring (I'm still thinking about it a lot now- 4 months later).  William Kamkwamba grew up in Malawi, and though he had very little formal education, he self-taught himself about energy systems by reading textbooks at the public library (in particular a book called "Using Energy" which now seems very difficult to find).  And through enormous determination, and surviving numerous hardships (multiple famines, poverty, family illnesses), he successfully built a 12-watt windmill (using materials rummaged from waste - spare bicycle parts, a tractor fan blade and an old shock absorber, and fashioned blades from plastic pipe, ...).  Which is enough power to charge cell phones.  And power small lights.

And though the story is quite heavy and tragic at times, there are many moments that are full of curiosity and fun - and it gets technical too! But never to the point of getting into too much boring detail -- just enough to make you want to go take apart and tinker with your gadgets (which is getting harder and harder these days - the only thing I could think of taking apart is my electric toothbrush.  You can't tinker so much with an iPhone or a laptop...).

And if my estimation is correct, after all that William's done (designed and built the windmill, wrote a book, TED fellow, initiating and particupating in numerous interesting projects, in particular, Moving Windmills, ....), he's today ONLY 24!  wow.

Anyway, my (maybe stupid) question now is, what about small-scale windmills (that you put on your roof for example, like solar panels)?  I imagine there is stuff going on.  Or maybe not.  And though I don't know much about wind, I know the higher your turbine is, the more efficient your system will be.  So what about kite windmills that you stabilize on your rooftop?  I guess there's a problem if the wind stops and your kite falls. Hm.

I will try to investigate further on these options.

In the meantime, if you have a chance, read William's story.